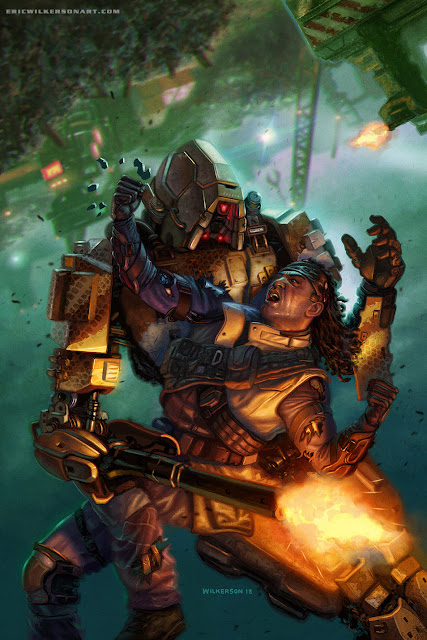 Recently I was commissioned to do four covers for a ten issue prequel comic book for Call of Duty: Black Ops 4.  This mini series provides a bit of exposition for each of the main characters in the popular shooter franchise.

This issue is about Prophet's attempt to save a malfunctioning robot from a heavily fortified scrapyard.  Prophet is a man with augmented cybernetic limbs that is conflicted by his own human weakness and the desire to be more robotic.  The brief I received asked for sketches depicting Prophet doing battle with the Robot "Reaper" though I was given the freedom to explore other narrative options.

After reading the provided synopsis and comic book pages I worked up a number of sketches.  More often than not I begin roughing out ideas quickly on my galaxy note 8 while watching tv, before bed or while out with family.  I've comfortably worked this way to develop concepts and compositions for years with the galaxy note phones.
Sketches worth exploring further were transferred to photoshop where I worked out more of the composition, value structure and color palette.  Working out all of these aspects of an illustration as soon as possible saves time and alleviates the risk of mistakes or revisions later on when I could be painting.
Below are the three options sent to my Art Director for approval by Activision.  When I settle in to produce cover sketches I always try to make each option a unique narrative moment with a different palette per sketch.  This way I don't feel like I'm just repeating the same composition from 3 angles.  For sketch A the concept the client wanted to see was provided.  Sketches B and C gave more specific character moments as described in the synopsis. 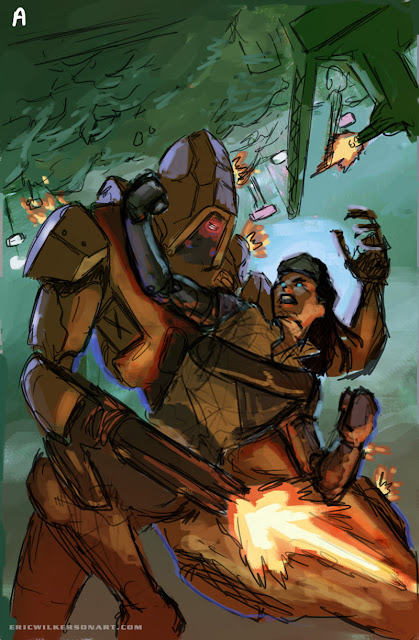 For sketch B, I thought it would be interesting to show the cybernetic soldier, Prophet standing on a mound above Reaper, pondering his own robotic evolution and when he'll transcend his physical body.  In this moment he is yearning to be more than what he is.  He is touching the robot tenderly despite the fact that this superior being is literally and figuratively trapped and enslaved. 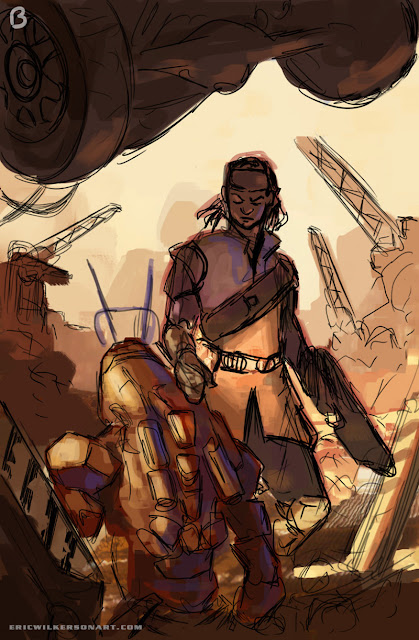 Sketch C is a direct scene from the synopsis. Prophet being spotted as he reaches Reaper and attempts to interface with the robot. 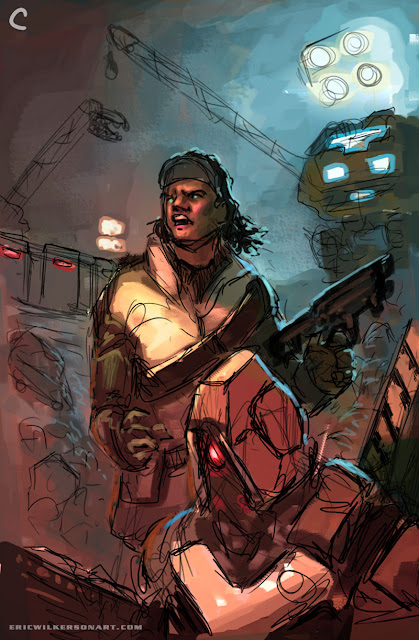 Ultimately sketch A was chosen and I began gathering as much reference as I could for the job.  Activision was kind enough to supply me with high resolution files of concept art, weapons and nearly three hundred high res model reference photos of an actor wearing a fabricated Prophet costume sans cybernetic implants.  The costume reference was great for some character details and lighting inspiration. 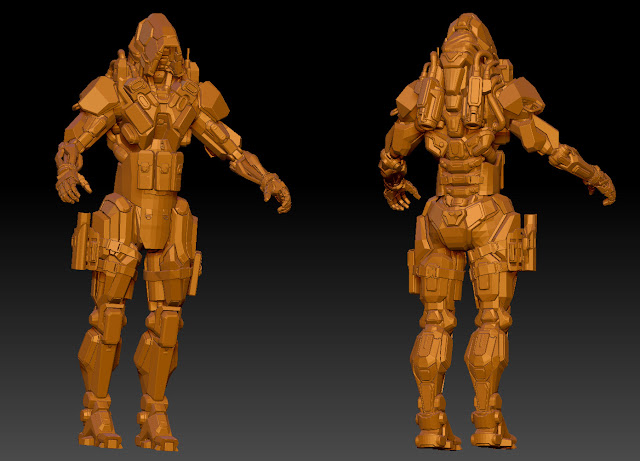 All my reference gathering and compositing now complete, I began work on the final drawing for the cover.  There was still an extensive amount of hardware and costuming detail to work out based on the provided concept art.  The 3D robot model provided invaluable lighting information but not much else. Below is my first pass at the line drawing.  After finishing this I was informed that the character model for Reaper had been changed to a more robust gulf war inspired tank look and I was asked to tone down the more scifi elements of Prophet’s arms.  So other than the light and shadow information I gained, none of that 3d model could be used for the sake of accuracy. 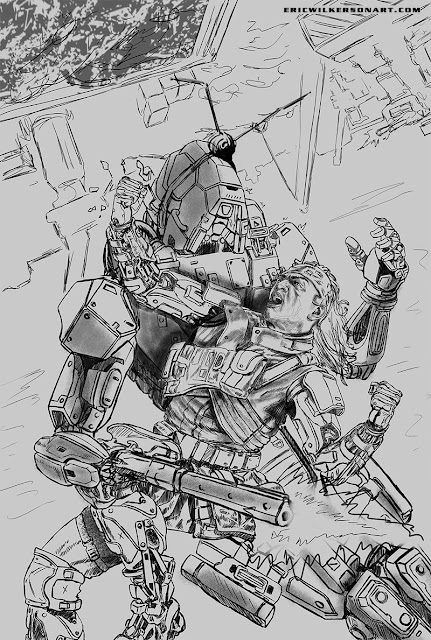 With the deadline looming, I quickly revised the drawing with the newly provided concept art reference and resubmitted for approval.  After the line drawing was approved I began work on the cover from background to foreground until complete. 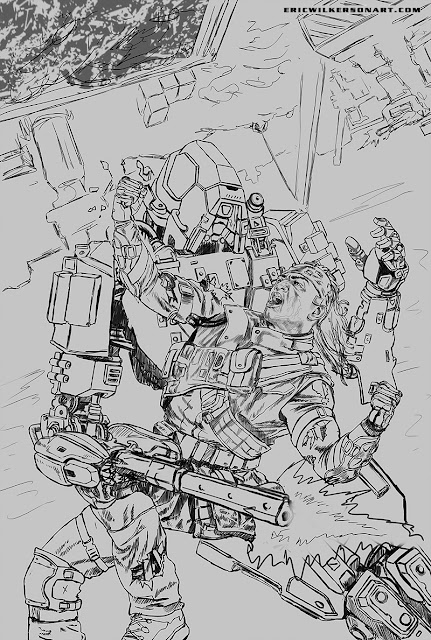 The cover was quickly approved and work began on the next issue.  Special thanks to my Art Director Scott Allie for the opportunity. 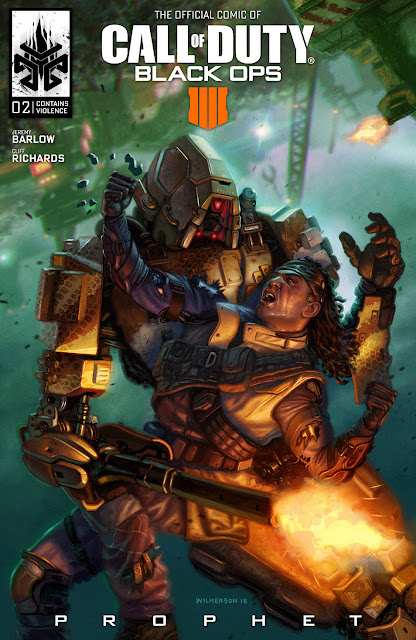 "The OBA" Oil on Panel 13" x 17". This is one of a few new paintings for an ongoing book project. As an African American artist, Illustrator and Afrofuturist, I'm more interested in depicting the farthest reaches of where we can go rather than paint where we've been. I'd like to believe that one day the first colonists of another planet will consist of those of African descent. Hopefully there will be room out there among the stars to escape the hate and injustice we've endured for centuries. I may not live to see it but maybe my daughter will.

When I showcased this painting at AwesomeCon in Washington D.C, I was pleasantly surprised by the outpouring of love and reactions it received. The best response was from a teenaged boy who stopped and stared at the print for a long time before telling me he’d never seen scifi painting of anybody that looked like him. He then went on to nervously whisper to me that he was half black and half jewish. I told him that’s cool because my daughter is biracial too. His eyes lit up as he shook my hand and told me he had to buy the print. Representation matters and it made my weekend to see so many come through at the convention to buy and support my efforts. Just about every artist at the con had some form of black panther fan art but nobody in the entire building had a portrait of a bald black woman in space. I ended up selling out of all the prints and mousepads I brought of this image so a big thank you to everyone I met. Prints are available through my website store and progress pics/timelapse vids are on my instagram ericwilkersonart. I’m posting more there these days.


DESIGN INSPIRATION
The Oba’s clothing and framework around her head are inspired by the South African Ndebele women who would adorn themselves with a variety of ornaments, each symbolizing their status in society. Ndebele women’s dresses became more elaborate after marriage and the wives would wear copper and brass rings around their arms, legs and neck. It is also inspired by the neck elongating rings worn by the women in the Southeast Asian nation of Myanmar.


I designed the Oba’s robes and shoulders to have ornamental patterns that would display the rich cultural heritage of her ancestors from Old Earth. Afro- Caribbean carnival markings adorn her shoulder pads and on silks wrapped in between her neck frame. Her face paint is both African and Afro Caribbean in design. The final touches to the painting were inspired by the colorful dashiki clothing of west Africa. Painting those little triangles was probably the most time consuming part of the entire piece. One minor omission from the final painting was the indian bindi headpiece. Not that there was anything wrong with it, I just wanted the focus of my painting to be completely afrocentric for once and not sample too much from other world cultures. 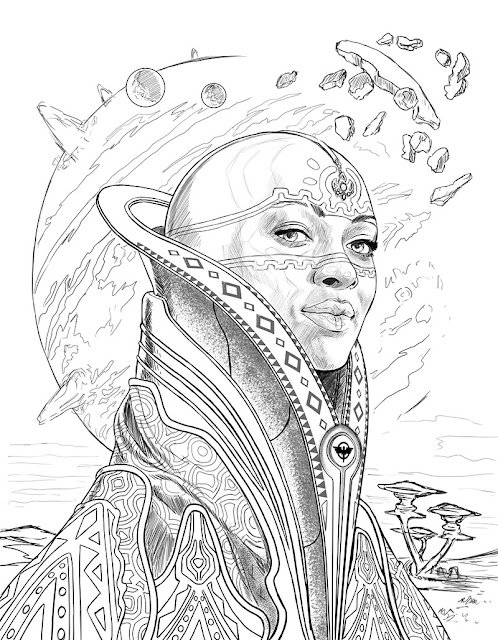 You know that feeling you get when you go on vacation, take a long calming deep breath and gaze at some new vista? That's how it felt to paint this. For a few short hours every few days for over a month I imagined that I went to the future and lovingly painted an Emperor on her colony homeworld. There are many more afrofuturist paintings I'm eager to complete that have been sitting in my sketchbooks for over a decade.  Though I've squeezed out a few over the years, I was always too afraid to focus on making more for fear that having a portfolio full of black art wouldn't help me land work with companies or art directors I always wanted to work with.  I think I've proven that I can handle different flesh tones and genres with equal aplomb. For now on in my free time I'm painting the kind of stuff that would make my ten year old self giddy.

I'm happy to share that my art made it into Imagine FX this month!!! Issue 133 is on sale now worldwide. I've always wanted to contribute something to this magazine and they were kind enough to let me share a labor of love with their global audience. Special Thanks to the whole ImagineFX team. If you'd like to see my process for developing maquettes for illustration check it out at your local bookstore. The final painting I built the sculpture for is heavy on social commentary so I wasn't sure they'd want to include it but they gave it the full page spread treatment. Doing this painting meant a lot to me and was my way of personally dealing with the hate and violence that plagues our country. Back to work. New alien sculpts to make!

Posted by Eric Wilkerson at 7:22 AM 0 comments

Science Fiction at its best has always been a form of social commentary.  Precautionary tales and imagery that cover issues such as politics, race, prejudice and inequality.
“Alien Lives Matter”  Is a painting directly inspired by the demand for justice for victims of police violence and the institutional racism which continues to plague the United States.   As an Illustrator of science fiction I ask myself what would it look like if we as humans treated an extra terrestrial the way we treat ourselves?  What might the outcry from a coalition of young multi racial activists look like?  I set out to create a composition which depicts a peaceful protest march through the streets of New York City's Times Square.  Oil on Panel 30"x 40".  Limited Edition Print available here.

Here is a cover I did awhile ago for the novel "Champion" by DS Brown.

It was a fun opportunity to experiment a bit with digital painting different textures for the characters faces. I also took a bit of time to sculpt a maquette of one of the alien heads. 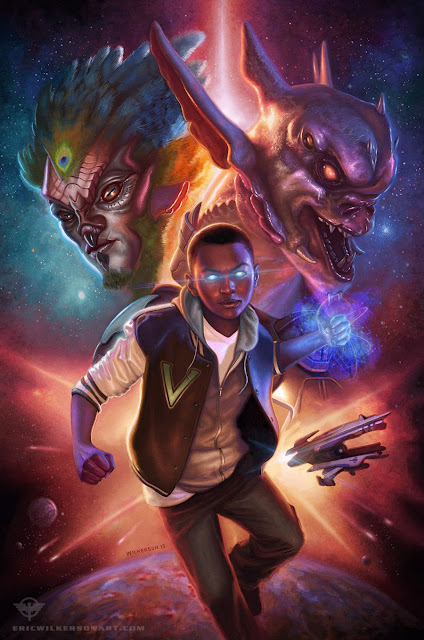 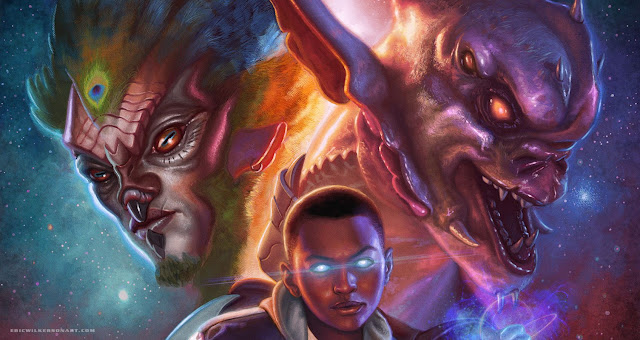 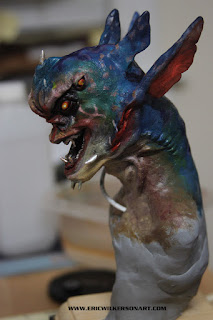 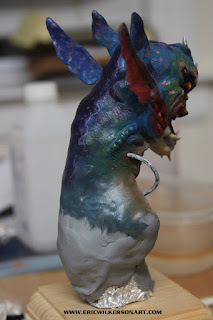 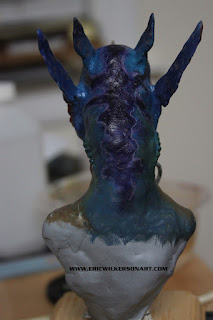 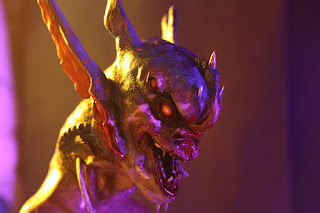 Let my painting light up your life with this officially licensed TOPPS Mars Attacks
table lamp by Lamp in a Box.  Makes a terrific gift for that special someone this holiday season.
http://lampinabox.com/mars-attacks-wilkerson-cover-art?bid=2
Posted by Eric Wilkerson at 12:22 PM 0 comments


via IFTTT
Posted by Eric Wilkerson at 8:14 AM 0 comments

Elsewhere on the web